← Misguided Youth
Into the Valley (of Death) – Charlton Away →

As we sit in the middle of the first international break of the season, it’s the perfect opportunity to take a breath and consider the story of Derby’s season so far and the first few months on the Phillip Cocu Era.

What better way to do that than via the medium of the classic Ramspace Barometer? (stolen from The Face magazine over 20 years ago and still going strong!)

Jayden Bogle – What a player this young man is. Started the season exactly as he finished the last one, on absolute fire! It is no co-incidence that the Rams form has fell away since his injury. Surely heading right to the top of the football world with or without DCFC.

The DCFC Academy – There has been no shortage of diss on these pages for Darran Wassall over many years, so now he seems to have finally hit a rich seam of talent, its only right to give him credit where its due. Bogle, Knight, Sibley & Buchanan are all quality first team material with another wave just behind them. It took 11 years and his 28 year old son is still chugging around in the 23’s (sorry, old habits die hard) but fair play to Daz, it does seem like he’s finally cracked it. 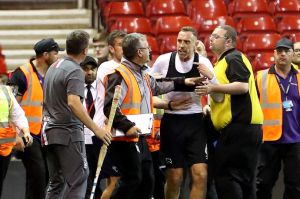 Richard Keogh – Can there be any Rams fans left who do not think this man is a legend? Made captain immediately by another new manager, plays every game as though his life depends on it, stands up when we win, stands up when we lose, leads the conga round the boozer, sings ballads into his phone in restaurants, fights with Forest stewards during his warm down. Biblical.

New Third Kit – After last years bang average efforts from Umbro, the new black third kit is without doubt an absolute belter and one of the coolest kits we have had for a long time. I’ll be all over that when they drop to a tenner in April.

Wayne Rooney – Just when you thought the days of mad transfers were over and the Lampard circus was disappearing over the hill, Mel drops Wazza. The exposure for the club will be insane, the commercial opportunities should be crazy and let’s not forget the player is an absolute beast who only knows one way to play. Waggy & Jack up top with Wazza in behind anyone? Bring it.

Wayne Rooney – Conversely, what the fuck Mel? Just when you thought were having a solid sensible window and the payroll was coming nicely into line, the club decide to down tools on all other targets and sign Wazza who can’t kick a ball until January. Lets hope we are in a position for him to have an influence when he lands.

New Chants – Whilst we are never the most original, the songs this season have been particularly poor. Rooney songs are cringe, there’s no words for regular Fuck the IRA chants and the terrible spirit in the sky rip off totally misses the whole point of the original ode to George Best in that A) he liked a drink and B) he’s dead. I almost want the bounce back. 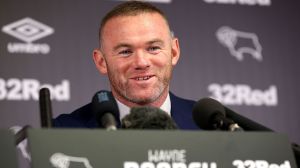 “What? They sold the ground to themselves to pay for me? Wow, thats a bit fucking moody that la”

Kieran Dowell – There’s no doubt it was always going to be a massively tough gig for anyone to try and replace Mason Mount but there’s equally no doubt Dowell is struggling. His form and confidence have fell away in line with the team in general & he’s even been called out by his manager. Never a good thing especially so early in the season. A goal would massively help him but I’m afraid, so far, not good.

Rams Wingers – Whilst we obviously lost Harry Wilson, much of his best work was down the middle so I don’t really understand how our wingers have got so bad in such a short space of time? Lawrence is up and down, FloJo is just woeful, Patterson we haven’t really seen and Bizzle seems to be struggling for confidence again since his dad left. Not signing a class impact winger was 100% one of the costs of the Rooney deal.

Forest Away – I wrote a full article on this but the manager got this game massively wrong and caused a massive dent in his goodwill credit account. Everyone messes about with their team for cup games, but this was Forest and to effectively surrender the match as we did was stupid and an insult to all Derby fans, particularly the 3000 plus who paid to go. There is also no doubt that the associated bad vibes set the tone for the Brentford debacle. Not cool Phil. Not cool at all.

← Misguided Youth
Into the Valley (of Death) – Charlton Away →