Over the last few years, I have written consistently that no player divides the opinion of Rams fans like Richard Keogh (and will do so again in the coming days!). However Tom Lawrence is increasingly starting to challenge that statement.

Signed by Gary Rowett as a replacement for Tom Ince (after a transfer saga that was typical of that period), Tom was the Rams marquee signing of last summer.

Arriving of the back of a storming season on loan at Ipswich, much was expected of Tom but for much of last season it’s fair to say he found it tough to live up to the hype on a consistent basis. Despite flashes of his obvious quality, he seemed to struggle under the spotlight and the Rams support, suffering from chronic shit signing fatigue, seemed to have little time or patience with his erratic output.

To my mind, it was a tough gig. Playing for a team who’s whole plan of attack was not to have the ball and then burst up the length of the pitch, whilst being asked to take every corner and every free kick on both sides of the pitch, must have been demanding at best.

In both this pre season and the early part of the season proper, Tom looked like a man re-born. Relishing playing with other ball players around him, having the ball to feet in the final third and sharing set piece responsibility, it was like a weight had been lifted from his shoulders. He was almost like another new Lampard signing. The goals were flowing and all was good, then his headloss as Rotherham de-railed him and provided all the ammo required for certain fans to turn on him again.

Currently he seems in good nick to me and his belting goal at West Brom again showed what he is capable of. He also continues to be a key player in Ryan Giggs new world with the Welsh national team. Yet there remains a nagging doubt he can always do more and certainly his body language often does him no favours.

Let’s hope he can find the consistency that he’s missing for the remainder of the season. If he can, he could become a major asset to our promotion push. Starting today at Wigan! 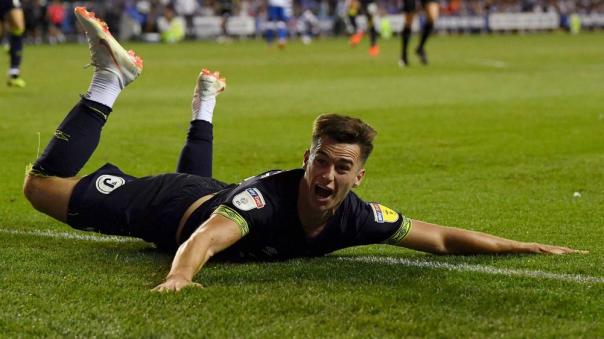 Tom reacts positively to being told pre match at Reading that he’s not on corners.