← Hull Away Part 1 – Tigers Mauled!
Something Comes From Nothing →

Yesterday at Hull was what away days were made for. Glorious sunny day, great laugh with friends and family, good beer, nice food and a late Rams winner to round off proceedings.

Here’s my thoughts on Hull away part deux.

We were all waiting to see what Frank would do with the team and, once again, he showed no mercy in his selection. I think we all expected FloJo to play after his performance on Tuesday, but dropping Lawrence Bennett, Fozzy and excluding Marriott all together was rough. I guess coming from an elite environment where brutal squad rotation is the norm, he’s not really phased about the egos of Masey B or Fozzy! 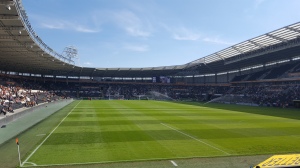 Field of Dreams – Can we play you every week please Hull?

I wrote last week that Hull is really not a happy ship and, although it was always going to be a different game, the first goal might kill them. We got that, should have had more and very nearly regretted not doing so. A pattern this season has been a lacklustre first half followed by a strong second. This was the polar opposite.

In the final third there is no doubt we are dynamite, with a multitude of options and whenever we go forward with purpose, you think we are going to score. We are also noticeably more threatening from corners with better delivery (plus a couple of new training ground moves) and Tomori and Keogh causing havoc. At some point soon, make no mistake, we are going to absolutely hammer someone.

Without the calming and holding influence of Huddz (and also his constant option for the centre halves to play out to), the midfield again looked far to open. In the first half this was an occasional concern, in the second half it was horrendous. Hull were flooding through a la Leeds, picking up the second balls and a better team would certainly have punished us. We need to sort this balance out and hopefully Huddlestone will help when he is properly fit. 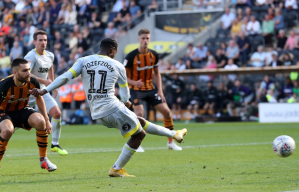 Don’t you worry about a thing, when Jozefzoon bags a last minute winner against the run of play!

Keogh and Tomori were epic yesterday. Keogh winning everything in the air and both but particularly Tomori making a couple of awesome blocks. The full backs were not so good. Malone is quick and has a great left peg, but he’s not as good a defender as Fozzy.

Wizzer had a bit of a mare, losing it badly after he was implicated heavily in the goal. He was so ponderous and scared on the ball it was daft. All he had to do was pop it to Flo or dink it over the full back, but he just kept hovering over the ball like one of those super striker figures from the 80’s – I just wanted to bang him on the head and make him kick it!

As I tweeted yesterday, the game went from an absolute cruise to a full on smash and grab. The last 10 minutes, I was fully expecting Hull to snatch it but once again a bit of raw, direct aggression from Bennett made the winner from nothing causing absolute limbs and scenes in the away end. Very rough on Hull but who cares.

Frank himself said there is still lots to work to do and he’s not wrong. However winning games whilst we gel our new team is a good thing to be doing and being 4th in the league at the first international break is even better. I am sure the Snake for one would prefer that to his current predicament.

Come on you Rams,

← Hull Away Part 1 – Tigers Mauled!
Something Comes From Nothing →