Today we have another guest post. This ones from the hardest working man in the Derby County blogosphere and the creator of the original and best Derby County Podcast. Its DCFC Podcast head honcho, Joel Clyne.

Popping out from behind Joel’s day on the Ramspace Advent is none other than our injured midfield maestro, Will Hughes.

“The opening game of the season at Bolton was pretty drab. There wasn’t a lot to get excited about and it didn’t really fill anyone with the optimism that many were expecting.

For me, the game will always be remembered for Will Hughes’ injury. There’s something incredibly uncomfortable as a fan when a player goes down and frantically waves to the bench, particularly in an era where simulation is prevalent.

To an extent, the deadline day signings of Bradley Johnson and Jacob Butterfield cushioned the blow of losing Hughes and even before his and Craig Bryson’s injury, the midfield was an area that could have done with an addition.

In my mind though,Hughes still remains Derby’s best midfield player. Derby’s form at the back end of last term was atrocious and when most players went missing it was Hughes that stepped up and tried to drive us on.

It’s easy to forget that Hughes was Derby’s player of the season last time around and his displays in that campaign were exceptional. My personal favourite was his performance against Rotherham. Derby had been bullied by a physical Rotherham side on your stereotypical cold windy Tuesday night and were trailing by two goals in a game that they should have been comfortable in.

Upon conceding the third goal Steve McClaren made a triple change, took off holding midfielder Mascarell and trusted Hughes to run the game in the centre. He did just that. He was outstanding. Hughes covered the ground, was constantly available for the ball and dictated the rest of the game. The remaining 21 players on the pitch were moving to his beat.

Hughes’ second half performance was outstanding. The play completely revolved around him and you couldn’t take your eyes off where he was on the pitch, knowing that the ball would fall back to him in a few passes time.

Derby miss Hughes’ input in games. His ability to dictate a game, change the pace if needed and his eye for a pass, particularly in the final third.

The injury to Hughes is a bad one but players come back from knee ligament damage and continue to have excellent careers. Injuries to the knee usually rob a player of a yard of pace, that initial burst, but Hughes has never been particularly quick so this shouldn’t have too much of an impact when he returns.

I listened to a podcast recently with Graham Hunter who interviewed Graeme Souness. In it, Souness mentioned that the game wasn’t about pace. It was’t about how quick you could run it was how fast you could think. An insult that is often thrown at Theo Walcott is that ‘he doesn’t have a football brain’. What people mean by that is that he makes the wrong decisions when on the pitch and doesn’t think as quickly as he should. How often can you say the same of Hughes? Rarely is the answer.

Paul Clement recently mentioned in a fans forum I attended that Hughes would be sent out to scout the opposition because he has sound knowledge of the game. Injury may take some pace from him but it won’t affect his speed of thought or his awareness of the game.

One of the lasting images from the Play-Off Final that Derby lost to QPR was the sight of Hughes in tears at the end of the game. The same occurred against Reading in the final game of last season. How fitting it would be to see a season that started so awfully end in the best possible way for Will.” 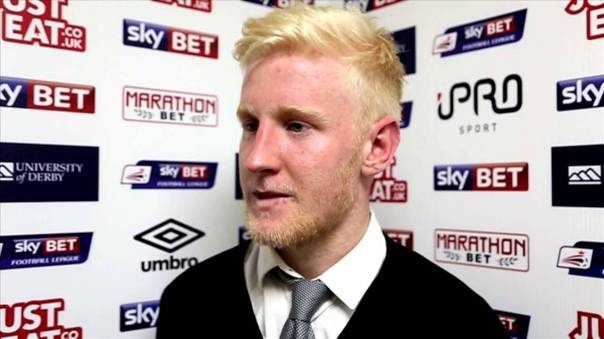 “Yes I watched them twice and told the boss we should invert the pyramid, deploy a false 9 with a trequartista and absolutely we need to get the ball into zone 14 as quickly as possible in the ten minutes either side of half time.”

Posted on December 17, 2015, in Derby County Advent Calendar 2015 and tagged derby county, ramspace, the rams, will hughes. Bookmark the permalink. Leave a comment.