← Heroes to Zeros
London to Paris to Madrid to Derby →

Derby County’s season is over and we have not been promoted to the premier league. In the end we couldn’t even make the play offs. Thus if that was the minimum requirement (as has been stated by everyone many times) then the season has been an abject failure.

However, as all Rams fans know, the statement of the facts only tells a very small part of the story.

There are many reasons why this season fell off the edge of a cliff in such spectacular fashion, indeed I think I could easily do one a day for the next month, but no one’s going to thank me for that.

In the Clough era, the majority of the blame for our outright mediocrity was rightly aimed at our ownership group. Forcing Nigel to work on a shoe string and blatantly using his family name to buy them some time to clear the decks. The arrival of Sam Rush signalled a new impetus and urgency and Nigel was correctly upgraded to Steve McClaren. Probably the only people who can take no blame this time around are the same board and ownership group who have backed Steve to the hilt with some serious money. Here’s my list of shame.

Steve McClaren – Absolutely failed to deal with problems thrown up by injuries and our defensive shortcomings. Why didn’t we sign a CDM instead of Lingaard (who is no better than JR or Wardy and certainly doesn’t work as hard)? Why didn’t we sign a striker or play Sammon and/or Thomas when Bent was injured? Why didn’t we try a new shape for more than 20 minutes here and there? Why didn’t he kill all the Newcastle stuff stone dead?

Eric Steele – Granty was fantastic last season and started this one in a similar vein. However he has been awful since the Forest game, costing us goals through a variation of outright howlers and his blatant weakness for shots straight at him and set piece crosses. Eric should has attended to these problems (even if they were driven by confidence) or recommended we put Roos in or resign Butland. 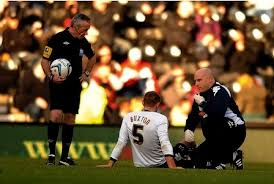 “Bucko says his back hurts, I think he can run it off”

Neil Sullivan – Our injury record this season has been horrific. Accepted you can’t do a lot about a cruciate knee injury, but it seems to me the management and diagnosis of our injuries has been very poor. How many strains and pulls have we had this year? Three times to players just coming back (Thorne, Whitbread and Russell). How many times are player supposed to be out for a week or two and end up being out for months? This department needs a review which leads me onto…….

Allesandro Shoenmaker – Am I the only one who thinks the Rams don’t seem as fit as we used to be? Add that to the pulls and strains mentioned above and I would question what this guy has bought over what Steve Haines was doing quite well in my view.

Brendan Rogers – I still don’t understand why Ibe had to be recalled the night before our biggest game of the season to play 4 minutes as a sub at Villa. Wanker.

Andy Croft (Groundsman) – On more than one occasion this year, I’ve thought our pitch at the Ipro has been shocking. I don’t know enough about this topic to comment further but I know our pitch has never been less than immaculate for years and this year it’s been largely poor.

Chris Evans – Two months ago this guy was the greatest thing to ever land at Derby since Bobby Davison. With boys own tales of private jets and flagging down the Eibar team bus, Chris was hailed as a hero bringing players to DCFC we could only dream of but 18 months ago. With the majority of this year’s signings now being questioned, it’s understandable that Chris’s contribution is also coming under the microscope. A great shout by Olly today was, “Has Mac/Evans signed a single player on a permanent deal that has improved the first team?” If Mac goes, this guy will be gone too.

The Players – regardless of your view on Mac, the Newcastle link and his management of the team, too many of our players have capitulated leading to a string of limp performances and an inexplicable catalogue of unforced errors. Many of our top players have been a shadow of their former selves and may not get the chance to redeem themselves in a Rams shirt again.

Understandably the focus is now very much on McClaren. Opinion seems split amongst Rams fans as to whether he should leave or not. However, whatever your view, I believe his position is now almost untenable and I would be astonished if he is still the Derby manager this time next week.

If that happens, we have two positives. 1) We already have an extra month to prepare for next season. 2) Derby is one of the most attractive jobs in English football and we will be able to choose pretty much anyone outside the absolute elite.

I’m actually really excited to see what happens next – and I haven’t felt like that about DCFC since February.

Come on you Rams!

← Heroes to Zeros
London to Paris to Madrid to Derby →