Last week, when I posted the Boys from Espana post, I made the comment that DCFC had not had many Spanish players but the one’s we’d had, had all been great.

This sweeping statement led one smart alec (that’s you indiepop Rob) to quickly remind me of Manel. In fairness both SSpaceram and I both recall him doing a job at a time of need. That said we soon thought of a few other strikers who certainly didn’t come up to scratch. Read this list and weep.

Mikel Beck – For several years the Bald Eagle hardly put a foot wrong in the transfer market, but when his signing radar went haywire, it went wrong big time. Beck was just awful and even his Wiki says he is often voted Derby’s worst ever player, which takes some doing. That bad we even let him go on loan to Forest! 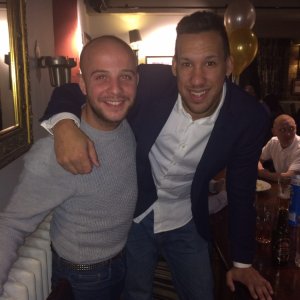 I wonder if this is at Stephen Pearson’s pre season party?…..Legal Ed: ok stop right there.

Danny Graham – One of a series of Phil Brown loans that didn’t work out. Graham actually played 14 games for Derby at a point when he’d only played 15 times for Boro. Not so much a terrible player, he just couldn’t score to the point it became a joke. He’s probably now made for life with several massive money moves, but seems to have recaptured his Derby form in the last few seasons.

Dean Holdsworth – For me this was an all time low for DCFC. Working officially as Phil Browns assistant, the clearly unfit and significantly overweight Holdsworth made 3 appearances for the Rams in 2005. The whole episode was just cringeworthy and horrendous.

Stern John – Another painful episode. Unlike most new signings, had zero goodwill to play with due to his Forest connections. The crowd were booing him from an early stage causing Phil Brown to question the Rams faithful. I remember one desperate shot he hit from almost the half way line at Pride Park causing a torrent of abuse to rain down. Scored goals everywhere but didn’t ever look like doing so for Derby.

Liam Dickinson – This guy could be an article in itself. Signed by Jagger for £750k, he never actually even played for us he was that bad. There are all kinds of rumours as to what went wrong for  him at Derby but our legal team have advised we best avoid them. Scored goals out on loan at Huddersfield and then Blackpool but still never got a sniff at Derby. Sold to Brighton for £100k after 1 year! Note – great piece on him in the excellent book “Nowhere Men” by Michael Calvin.

Feel free to ping me anymore you can think of in the comments.