← John Eustace – Here’s what you get
Post Match Bullets – Leicester →

With the season starting a week early I ended up being on holiday for the big kick off. Albeit I did manage to catch the Blackburn game in a bar whilst in Tenerife.

However, better late than never, herewith our new season barometer for 2013/2014.

John Brayford – It may seem strange to put the sale of one of our best players at the top of the barometer, but, taking a step back, this was a good deal all round. DCFC had great service from a great player and then made a handsome profit as he moves onto the Premier league. John himself was monumental for the Rams and more than deserves his shot at the big time. We wish him all the best. 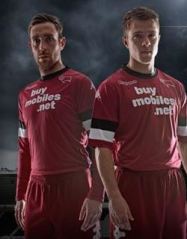 Away Form – The Rams Achilles heel last year. Two wins out of two suggests the Rams travelling support may have a bit more to cheer about this time round.

Chris Martin – I think its fair to say Chris wasn’t universally popular during his loan spell and no one was doing cartwheels when he signed permanently. However after a cracking pre-season and a barnstorming start to the actual season, he’s now our “main man” according to Nigel. Who’d have thunk it!

New Away Kit – I saw its debut at Port Vale and thought it looked smart. I then went online at half time to be greeted by outright uproar after a badly lit promo shot suggested it was bright Red! It’s not and, for me, it’s one of the most stylish away kits we’ve had for a good while.

Craig Ramage – I always enjoyed Rammer when he was a player and I’m already enjoying his straight talking and early nineties anecdotes on Radio Derby. Having said that they could have employed Andrejs Pereplotkins and a translator and it would have been preferable to….

Roger Davies – Rams legend he may be but his outdated view of football coupled with his nasal whining was annoying beyond belief. His links to the club meant he could offer nothing outside of the party line (catchphrase “football’s all about opinions”) and he won’t be missed by the Spacerams. One of our friends bumped into him on a night out in town last season…. STOP right there – Legal Ed.

Twitter Trolls – Topical, but DCFC have our fair share of these scumbags. The abuse that Bryso and Hughesey got simply for saying they liked the new away kit was horrendous. Glad to see Bryso is back on after a brief break.

Nathan gets stuck into pre season training to make sure he’s bang on it to fulfil his role in the team this season.

Leicester City – With no new signings to speak of and the manager top of the sack race, the big gamble doesn’t look to have worked out. Still don’t worry everyone; Konchesky is still getting his £30k per week. What a job Sven did there.

The Not So Magnificent 7 – With the clock ticking on the transfer window, only Frank has left permanently and Tom Naylor has now been loaned out until Christmas. Despite Cloughs confidence, it seems moving these guys on maybe more difficult than we thought. I suspect we may have to resort to more loans to clear the decks properly.

The Derby County Training Centre in Partnership with the University of Derby – OK so it’s not exactly renaming St James Park the Sports Direct Arena, but isn’t this just a bit rubbish? Doesn’t exactly roll off the tongue like Moor Farm does it?

← John Eustace – Here’s what you get
Post Match Bullets – Leicester →