So the summer breaks over and normal life resumes again with the visit of Sheffield Wednesday this weekend. If the Scunthorpe games any sort of pointer we are set for another rollercoaster season, but then would you expect anything else with the Rams?

However before we get into the real action, herewith our usual Barometer of what’s been Good & Bad (&Ugly) in the world of DCFC this summer.

Will Hughes – No disrespect to any of the actual new signings, but there is no doubt that the best new face in our squad is Will Hughes. Absolute mercurial performances in several of the friendlies continued into the Scunthorpe game. Compare him to new England man Jake Livermore (when we had him) and Tom Carroll who are/were supposed to be two of the best young midfielders in England. Yes you’re right there is no comparison.  Enjoy him whilst he’s here everybody. 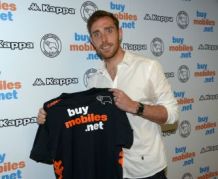 ” Yeah, great to be here, love the shirt too. Size? This ones XXXXL”

The Keogh signing – I think we are all now well tuned into the Glick/GSE modus operandi, but every so often they do something like this. After pleading poverty since the end of last season, Glick suddenly dumps his usual cautious/ponderous (delete to taste) transfer practices and “pushes the boat out” to outflank half the championship and specifically billionaire Thai plaything Cardiff City. Fair play, that was a good day.

Big Screen – Opinion seems split on this and the alleged £1m price tag doesn’t help. However I personally think it’s a good thing and again raises the bar for us in the Championship. Now we just need it to work and include a match timer please.

Nathan Tyson – The hex is broken and it’s two in two now for Nathan. I really didn’t enjoy hearing him get mercilessly slated by various Derby fans at several of the friendlies so I’m really pleased he’s off the mark. He’s not the striker we are missing, but if he pops even 10 goals with his nuisance value, he will be a more than suitable replacement for Steve Davies.

Kappa Gear – So all the rumours were true and the Rams now have Kappa for the next 5 years (that still seems a long contract to me). Personally I think the kits are smart and much more modern than the Adidas equivalent which was starting to look a bit tired. I’m also enjoying the potential return of the limited edition third kit, which might just end up being the best of the lot.

Tom Naylor – Admittedly being played out of position, but he was awful in a couple of friendlies I saw and was torn to shreds by Scunthorpe. Let’s hope it’s just a blip or he might find himself rooming with Bailey in the Departure Lounge.

Still No Big Striker signing– Whilst rumours abound that this might shortly change, I’m writing this genuinely hoping the item is made redundant immediately. All the talk this summer was about a quality striker who would raise the bar and make a difference but it seems we haven’t even been close to securing one. If GSE are wondering why ticket sales are down, here’s your answer.

“I found it under the stand next to the wheelie bins. It looks like there’s about 15000 letters in here”

Season Ticket Fiasco – After all the early bird marketing and incentives, to send out season tickets 2 days before the first game of the season is simply taking the piss. It also gave people (who need no encouragement) unnecessary ammunition to be negative about the club. I hope Glick has chopped someone’s head off for this one.

Tom Glick’s departure – This has been well covered elsewhere, but I’d agree with www.derbycountyblog.co.uk that this is a great move for Tom and a bad one for the Rams. Like or Loathe Glick, he’s a top operative who is clearly very good at his job and always respected our club and fans. I think we’ll miss him more than you think

The Sale of Jason Shackell – Easily the low point of the summer. The sale of the Rams popular skipper after just one season remains shrouded in mystery. Why were we openly touting him? What was the true fee? Was there a fall out with Clough? Why did we sell him to ‘strengthen the team’ and then come up with a more expensive replacement? Why does Shacks seem to move every summer? The only thing we do know is that this was a massive call by somebody which has left an equally massive hole in our defence for Keogh to fill.