Come on you Falcons!

It doesn’t really feel like football season has gone away with all the Rams transfer action. However, some of us have been getting our live sport fix watching Derbyshire Falcons in the T20. When it comes to cricket, Derbyshire are perennial underdogs but are having a decent run in the shortest form of the game, leading to this Fridays home game against Notts. After the disgrace of the first fixture, we definitely owe them one…

For those that missed it, Derbyshire lost the first fixture after Notts’ Australian batsman David Hussey hit a match winning 60. The problem was, Hussey wasn’t actually registered to play. Now in football you’d obviously forfeit the match and probably lose points as well as getting a fine. Well, not in cricket. Derbyshire are minnows, Notts hosts Tests and have several England players. Notts were fined a paltry £600 and kept the points. To put that figure in real terms – the bar bill of 20 fat, sweaty, Notts beer-monsters.

Undeterred, Derbyshire are still well in the mix with a team of likeable non-stars (ego-wise). In contrast to the expensively assembled underachievers at Pride Park we’ve seen over the years, the Falcons have none of the expectation having been assembled from cast offs and young developing players.

If you’re not doing anything on Friday night, get yourself down to the County Ground and shout the lads to  victory over those dastardly dogs! 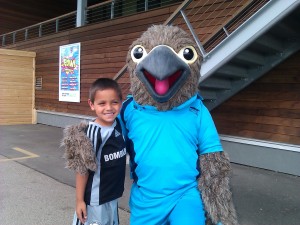